A trip to emergency with my baby was a shocking reminder of how easy it is for curious crawlers to get injured once they have the skills to investigate their way around the home. No matter how careful you are, those bubs can be mighty determined to hurt themselves at times but after the close call I’ve just had, I will be taking some extra precautions.

Near scrapes, every day

I’m not sure whether it’s because I had a bit of a gap with my last baby and have forgotten how hard it is to stop curious crawlers from getting hurt, or whether my bub is particularly full-on and incredibly inquisitive; but either way it’s exhausting and stressful trying to constantly avoid potential disasters.

The most common situations he needs rescuing from daily are: 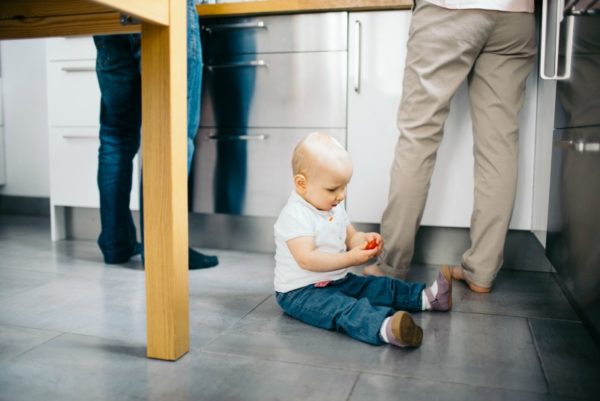 Babies in the kitchen are not a good idea

A lot of the time my baby is under my feet or holding on to my legs while I try and do things around the house, which I didn’t think too much about until it landed him in hospital. I was making dinner in the kitchen when his exploration at my feet threw me off balance, causing me to drop a very sharp knife on the floor, slicing his finger in the process. There was so much blood, he was screaming, my other boys were crying and so was I – it was terrible and my husband wasn’t home. I managed to stop the bleeding and head to the hospital where they glued the cut. In this instance I was incredibly lucky because he didn’t even require stitches, however I know that this could have ended up much worse – what if the knife had cut his eye or face, or his finger had been sliced off completely? I can’t even bear to think about it – so very frightening. 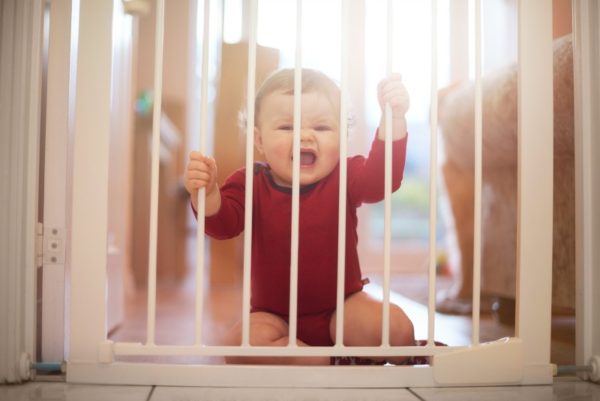 Trapped and crying – better than being unsafe!

In light of this scary incident I’m now taking a few more precautions around the house. On top of the usual rituals of removing small objects off the floor, closing dangerous cupboards and rooms, cutting food into small pieces, blocking access to wires and making the other children more aware of him; I’ve decided to limit his crawling when I’m in the middle of an activity that involves things that could be harmful or occupies me too much.

From now on he will be safely strapped into a highchair – no matter how much he protests – when I am cooking. Listening to his cries of frustration at having his freedom curbed is better than another trip to the hospital. The same goes for when my focus is on something else, because I can’t stop the cat from scratching him (after he’s been smacked non-stop by my baby) if I’m not paying full attention right? Better to pop them somewhere safe; a playpen, baby gates or even the cot are also other good options, rather than risk something really bad happening.

Does your baby get into near scrapes constantly? How do you avoid disasters with your crawler?