The water might still be a bit fresh but sunny beach days have definitely already begun – yay! When you have a little one though there are a few potential hazards among all the sun and fun that you need to be aware of and armed with information on how to keep them out of harms way.

This one seems obvious but it’s incredibly important to remember because a toddler can easily wander off into the water when you’re distracted for a moment. Twenty seconds is all it takes for them to actually drown. Children between the ages of 1 and 3 are the most at risk because they’re crawling or walking and incredibly curious, yet have no understanding of how dangerous the sea can be. To be safe you should supervise young children at all times, only visit beaches with surf lifeguard patrols, swim between the flags, teach them to swim as early as possible and fit them with flotation devices such as a back-bubble and arm bands (floaties). It’s also a good idea to learn resuscitation techniques so you know what to do in the event of an emergency.

Sometimes beaches will have signs up warning people that there are things such as blue-bottle jellyfish in the water, in which case it’s best not to take your child in. In many cases however, there’s no way to know when there are potential creatures around that might be harmful. The most dangerous ones to look out for are the blue-ringed octopus, box jellyfish, stingrays and stonefish – all of which will require you to call 000 if your child gets bitten or stung. Symptoms might be vomiting, confusion, trouble breathing and extreme pain. Other jellyfish, including the blue-bottle (Pacific Man-O-War), are more common and usually only result in some mild pain and a red tentacle mark.

To help prevent your child getting stung or bitten, you can dress them in a full length rash vest or wet suit and teach them to ‘look but don’t touch’ if they sea any creatures in the water. If they do get stung the best immediate course of action is to alert the lifeguards who will assess the situation and help with treatment. DO NOT urinate, pour soft drinks or rub sand on the area, these old wives tales are not effective treatments. 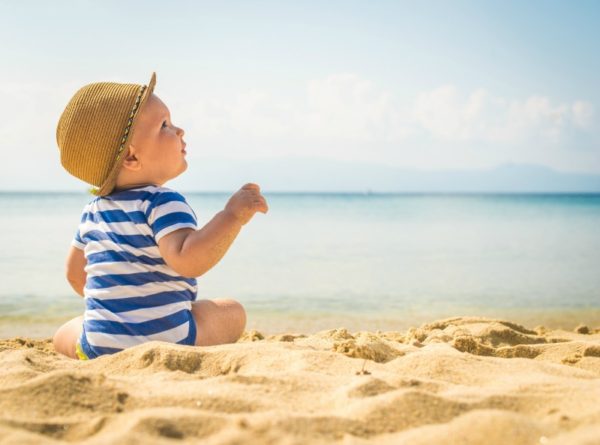 Both sunburn and sunstroke are very common in Australia and can happen at any time. Sunburn unfortunately only shows up after some time has passed so you may not realise it’s happening at the time, and sunstroke (also called heatstroke) occurs when too much fluid has been lost from the body and your child’s core temperature gets too hot causing their internal systems to shut down.

Tips for avoiding both sunburn and sunstroke with your little one include:

Unfortunately people often leave a lot of rubbish on the beach or in the sea which then gets washed up on the sand, meaning there are many ‘exciting’ objects for your curious toddler to get their hands on. It’s important to supervise your child at all times to prevent them touching or swallowing something dangerous and a good idea to sweep the area before you lay down your towels and chairs. Items you might want to look out for include: Little sensitive feet can often fall foul to sharp rocks and coral when they’re exploring rock pools and other areas of the sea. If you believe there is something sharp underfoot, it’s best to carry your child into the water or swim in another area. For rock pools and other shallow areas, put some waterproof footwear on their feet which will give them some protection from sharp objects and hot sand too.

This isn’t a nice one to think about, but similar to drowning, a young child can easily wander off when your back is turned and either become lost or worse, taken by a stranger. Beaches are often crowded places and it’s not easy to locate a small child once they have walked out of eyesight. If your child is missing the best thing to do is immediately alert the lifeguards. To prevent this happening however, make sure you have your eye on them at all times and teach them to go to the lifeguards if they get lost. You could also have a band or something similar on your child’s wrist with your name and mobile number on it too.

What things are you careful about when visiting the beach with little ones?