Avoiding coffee can be REALLY hard when you’re expecting, especially when that baby is making you extra tired or you have trouble sleeping. Which makes us all question just how bad it is to have caffeine while pregnant.

Caffeine is a natural stimulant found in the leaves, seeds and nuts of many plants, but most commonly the coffee bean and tea leaves – which is why people associate most of our caffeine intake with having a cuppa.

Impacting the central nervous system and brain, it can make you feel more awake and raise your heart rate and blood pressure, but in large quantities it can also cause anxiety, trouble sleeping, irritability and headaches.

Why it’s bad during pregnancy When you’re pregnant, whatever you’re consuming or absorbing into your body will also make its way to the baby via the placenta. While birth defects have not been reported due to an excessive amount of caffeine intake by mothers, studies have linked caffeine consumption to increased risk of miscarriage, lower baby gestational weight (which can lead to other health problems) and even babies who suffer from ‘buzz’ withdrawals and sleeping issues once they’re born.

Caffeine reduces your ability to absorb iron too – a mineral that’s in high demand when you’re expecting or breastfeeding.

So how much is okay?

Australian recommendations for pregnant women are to have less than 200mg of caffeine a day, so if you buy your coffee at a cafe (which is stronger than instant coffee) then it’s best to stick to just the one cup a day, or for those tea drinkers, 2-3 cups max daily.

It’s hard to determine exact caffeine quantities of various drinks and food items though, and tea and coffee aren’t the only caffeine culprits.

What has caffeine in it?

Caffeine can be found in coffee, most teas, cocoa, chocolate, cola, energy drinks, desserts, biscuits and also medications – basically most things which give you a bit of an energy boost. So even if you’re not a coffee drinker, you could accidentally tip yourself into unsafe caffeine levels during pregnancy by eating stacks of chocolate bars and downing cans of coke, or simply taking your regular doctor-prescribed or over-the-counter medication.

As a guide, here are the caffeine levels of some products: 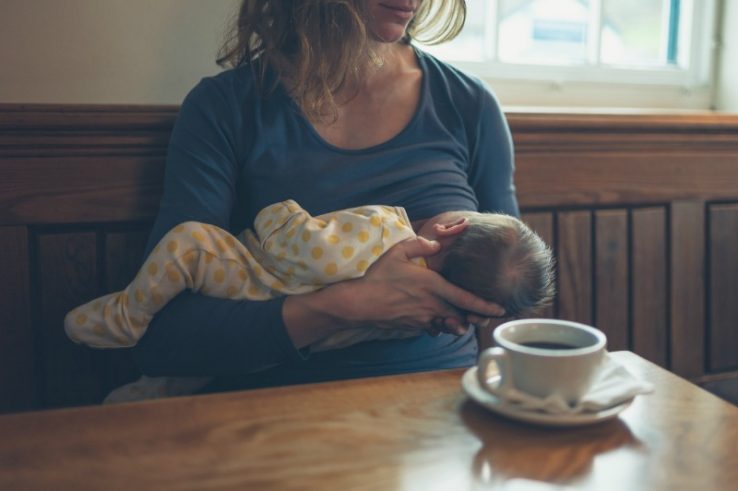 If your child is breastfed then what you eat or drink will also make its way through to the baby. Unfortunately this means it’s not a good idea to chug back the lattes just yet either (even though we know you need to!).

It only takes caffeine 15 minutes from when you’ve had your drink to work its way from your system and into your baby’s mouth, with concentration levels of caffeine in your breastmilk reached after an hour of having drunk your coffee.

Just remember this, if a coffee can perk you up – imagine what it is doing to your baby. Their systems are so sensitive and underdeveloped, it can take newborns around eight days to process and metabolise the caffeine from 6-8 cups of coffee. The older they get, the faster they’ll be able to clear it (around two and a half hours for the same amount when they’re six months old).

Considering excess caffeine can cause babies to have digestive issues, irritability and trouble sleeping – maybe that extra cup of coffee just isn’t worth the risk.

How to make the switch

Decaffeinated coffee is an option for those who can’t live without multiple cups a day but there are no guidelines developed around how much decaf is safe to consume, due to a lack of research. Other great choices are caffeine-free herbal tea, fresh smoothies made from veggies and fruit, and of course, water – the most important liquid during pregnancy and breastfeeding.

Overall, just be sure to stick to only the one cup of coffee or several teas daily, avoid things like energy drinks, and don’t forget to watch what other things you might be consuming that could contain caffeine too – including cold and flu medicines.

We know it can be hard to abstain from your caffeine fix when you’re growing or feeding a little one, but it’s not forever so hang in there! To help get you by, here are seven ways sleep-deprived mums can survive WITHOUT coffee.