It has now been nine days since my son began his toilet training adventure. In this week and a bit, there have been highs (magnificently communicated and then implemented poo at the local airport), there have been lows (the state of cubicle my son had to attempt to do his business in at the Hollywood Bowl, East Finchley) and there have been a number of screams from Mummy over the following two things. 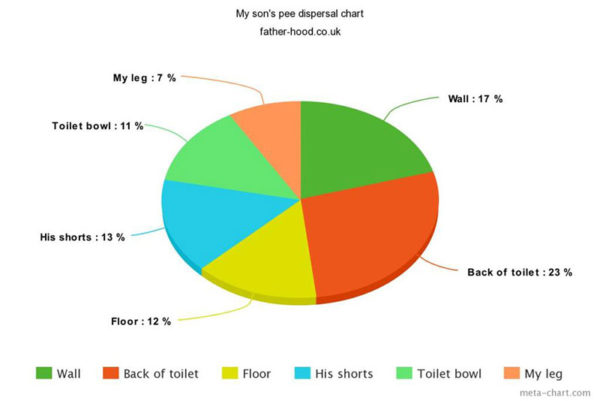 Obviously, my reaction was to laugh off her first concern on the basis that “he doesn’t really know what he’s doing”, and chortle off her second worry on the basis that “I’m a 37-year-old man and I still miss the bowl on a semi-regular basis”.

So that was that. End of pee chat. Nothing more to say. Article finished. Until next time …

… and I’m only joking. My wife is smart and persistent, and thus she fairly swiftly worked me into a position where my only option was to cease laughing and start investigating. Thus I donned my virtual Noddy hat and opened the case of the ‘Toddler erections and poor pee dispersal’.

And guess what I found out? Actually, don’t guess. Discover all right here, right now.

Taken all that in and feel a bit better about life, toilet training, pee spray and erections? Fantastic, because my son’s just told me that he’s got to go, which means I have to too.

This article was published in August 2018 with permission from Father-Hood.co.uk. Read the original article here.