Approximately half of all toddlers refuse to try new foods so it’s no surprise that eight out of ten Aussie parents worry about their child’s eating habits.

If you share that concern, try these tried-and-tested tips to take the mayhem out of meal times and give you some peace-of-mind in the process:

We know it sounds nuts but it works! We’re not talking about giving in to their demands of chips and lollies for every meal of course, but what you can do is hand over the reins when it comes to deciding what and how much they’re eating – from what you’ve already prepared.

“Our job as a parent is to make sure we feed them – that we give them the right food, in the right timeframe, in the right amounts. It’s their job to eat it, so if they’re not going to eat it, that’s fine,” says mothercraft nurse, Chris Minogue.

Eventually the idea is they’ll start to eat more of what’s presented to them, especially if you let them use cutlery and their hands themselves too.

“I’ve done loads of work overseas, and the Mediterraneans just put everything on the table, and the child can eat the whole bowl of anchovies, if he feels like it. They don’t put extra children’s food on the table; they just put the meal down and let them navigate through the table,” adds Chris.

Most mums freak out when they see their kid mucking about with the delicious and nutritious meal they’ve spent ages preparing for them, but this is actually a good sign!

In a UK study where children aged three to four were given fruits and vegetables to eat, the ones who were encouraged to pick up and play with them were more likely to taste them than those who weren’t allowed to play with their food. So don’t stress, forget about the mess and let the games begin! 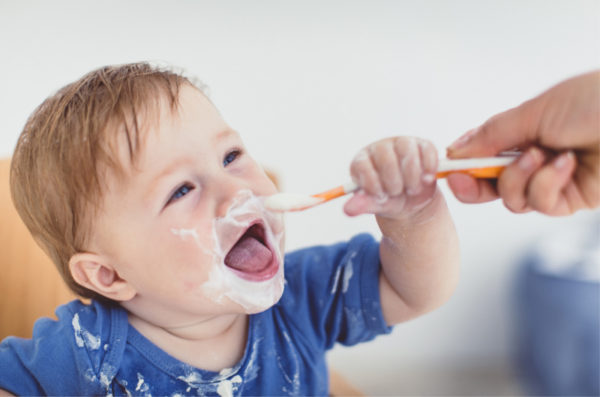 Fussy eating is bad enough at home but can be even more difficult when you’re out or have had a complete shocker of a day. Most kids love a squeezy feed though so to make things a little easier on yourself, just grab a food pouch when you need it. Just make sure it’s one with no added sugar or salt and no artificial colours, flavours or preservatives, like the new Woolworths Smiling Tums range.

Super affordable at only $1 a pop, all nine different flavours are naturally sweetened with fruit or veggies and suit bub at breakfast, lunch or dinner. The fruit custards are particularly great with no added cane sugar or fruit juice concentrates.

There’s nothing like a good old distraction to get toddlers shovelling in the munchies. Try funny face plates (with foods made into characters and shapes), creative place mats, colourful character design cutlery and fun shape cutters for sandwiches, fruit and veggies.

Another smart tactic is to always make sure there is something you know they love as part of the meal. That way they can’t refuse the whole lot, and even if they only end up eating that and nothing else, it’s not the end of the world (see point one). 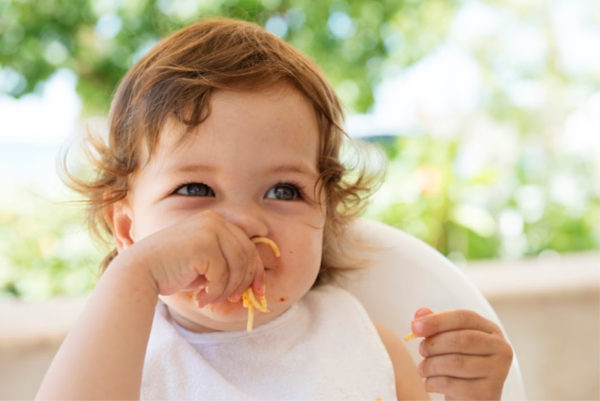 There is zero point getting worked up about your child’s reluctance to eat certain foods. Believe us, they generally are getting enough nutrients (even if it seems like they only ever eat crackers and rice), or the phase will pass and in time they’ll learn to try and like different things – as long as you keep providing them.

If your child is hungry they will definitely eat (at some point), so if you’ve got a stubborn one who likes to skip dinner only to wake up later on, Chris advises not to get too worked up and stick to your guns.

“If he’s hungry in the middle of the night, give him a drink of water and tell him breakfast will be at 6am,” says Chris.