If you are reading this right now, you’ve most definitely borne witness to a child throwing a tantrum. Tantrums are, in fact, all around us but one expert says that even though they can seem alarming, there are ways to handle them that take care of everyone’s feelings … and can even help parents and kids grow closer.

“Tantrums are big emotions that the child doesn’t know how to deal with,” Sharon Turton, psychotherapist and author of The Art of Taming Tantrums, says.

“In a nutshell, it’s emotional overload in the brain that is too much for the psyche to handle at that moment,” she says noting that parents could think of it as the body’s safety response. Kids shut down what’s really going on with them, throwing a tantrum instead.

Sharon says tantrums are not under kids’ conscious control and they are emotionally very normal because growing kids don’t have the impulse control they need to remain calm and deal with the root problem.

When are tantrums most likely to occur?

There are lots of situations where kids become primed for tantrums, Sharon says, but they often involve not having their needs met.

“Often if a child is tired or hungry or thirsty or just hasn’t had enough cuddles in a day, those big feelings of lack might come up and overwhelm the brain … and out come those great big feelings.”

Sharon says the tantrum is really the tip of the iceberg, and that this primitive display of overwhelm is usually triggered by another more complex root cause.

A gentle and clear response

Of course, for parents, these tantrums are often mortifying with mums and dads very keen to keep them to a minimum and get them under control quickly.

“We need to have empathy for what’s going on at that deeper level as well as having boundaries,” Sharon suggests.

“Boundaries are super, super important for kids and kids learn how to grow up in this world socially and emotionally when there are boundaries that are set.”

But punishing a child for having a tantrum is not the way forward.

“If those boundaries are harsh, just looking at the surface behaviour and there’s no empathy, then the child is not actually learning anything at all except how to repress, suppress, shut down those big feelings. That’s not what we want for an emotionally mature child, then teenager and adult, for the rest of their lives.”

Instead Sharon suggests being compassionate, addressing what’s going on for your child and touching on why it might be occurring so that they know you are there to support them.

For instance – “Sweetheart you are frustrated, you’re angry, you’re throwing your food on the floor” but not going too much deeper when your child is very upset. Once kids have had some time to calm down, Sharon says that their reptilian brain – which has them overwhelmed and acting out – gives way to their more logical brain.

That’s when you can talk about what has happened and why in a kind and clear way.

“That is the time to then sit down with them and tell them the story of what happened – ‘You were so mad at that time, you threw your food over the floor … you know that in our house we don’t throw food. Mummy is always here for you to help you with your big feelings.'”

Giving kids some space to calm down if they need it is really important too, Sharon says. Just let them know that you’re around when you need them “because they do want us nearby.”

Try saying something like, “I get it that you don’t want me nearby, but I’m here. I’m not going too far away. I’m always here,” she suggests.

What if you lose it too?

You’d be lucky to find a single parent on the planet who hasn’t melted down alongside their child at some stage, but Sharon says this is normal and urges parents not to be too hard on themselves.

“When our child triggers us we don’t necessarily have the tools [to handle our feelings either] and so we lose it,” she confirms.

“It’s really important to go back and look at it – ‘I lost it then … how could I have done better?'”

“Just the act of observing yourself having lost it and acknowledging that, is growing your neural pathway to say ‘I can do better’, and ‘next time I will breathe, I will pause.'”

It’s this breathing that can help to short-circuit a meltdown that is about to get away from us, switching off the fight or flight response and engaging our more logical prefrontal cortex. Why punishing and yelling is a flawed response to tantrums

Can you discipline or punish your child out of their tantrum behaviour? Sharon says it’s not a good idea at all.

“The child will stop to a degree … because they’re scared. And so you are teaching them through fear. When you’re teaching through fear, they’re not learning anything about how to regulate emotions, about how to be emotionally intelligent, and how to connect in a healthily emotional way with other people in society as they get older.”

“It’s a shutdown,” Sharon says, and it’s not preparing them for the challenges that lie ahead.

“‘Go to the naughty corner! Go into your room and think about it!’ Well as if they’re going to think about it! They’re frustrated and they’re angry.”

Sharon says that this sort of punishment actually creates a disconnect between parent and child and may make them even more likely to act out again, because they feel misunderstood or confused.

“They haven’t learned anything about compassion, about empathy, and by being sent off like that, it’s creating that disconnect.” 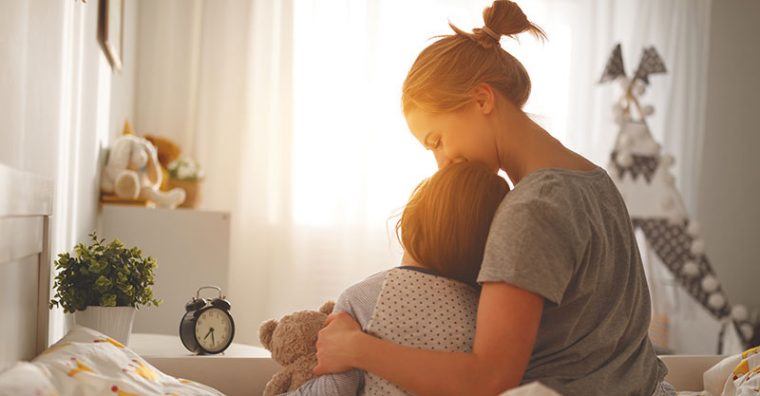 In the end, our kids look to us to model emotionally intelligent behaviour. Our children are watching us all the time – so fessing up to flawed responses and being open and honest helps them too.

While Sharon has a whole bunch of strategies to help parents work through tantrums, her number one tip is this:

“Pause and breathe. That starts off the whole chain of self-regulation. And really it’s the only way to have a beautiful connection with your child – to be there, open and available even when they’re triggering you, even when there’s chaos everywhere.”