Before I had my son, people always told me that my life was going to be so different when he came along. They were right. On many practical levels, my world is a completely different place to what it was four years ago. What people didn’t mention was what it was going to do to my relationship.

That sometimes I was going to get crazy and irrationally angry in the middle of the night. That I was going to love my husband more deeply than I ever had, but that sometimes I would feel like putting on headphones in the middle of an argument so I didn’t have to listen to him anymore (to be honest, he’s probably the one who needs the headphones). That I was going to have to work to make sure our relationship doesn’t just become about the kids. This is how we’ve managed it so far.

When my son was little, sometimes there were periods of time where he was inconsolable (as babies occasionally are). Nothing we did worked – feeding, changing, bathing, holding, singing, dancing – and my husband and I would end up feeling stressed. We often snapped at each other.

Then, on one such day, when nothing was working, my husband randomly said ‘Hey Eli, did you know that the Backstreet Boys aren’t together anymore?’ And when my son let out his next ear piercing screech, instead of feeling anxious, I laughed. Because it genuinely sounded like Eli was devastated that they’d broken up.

It became a thing. We would try to think of the things that would be most ridiculous for him to be crying about. It wasn’t a perfect solution, and obviously I’d prefer that he wasn’t crying at all, but we stopped compounding the situation with our frustration. We still tried to meet our baby’s needs and help him feel happier, but dealing with it from a place where we were less stressed meant we actually had more to offer him, and each other.

Have grace for each other

Most days I wake up tired. Occasionally I feel unexplainably grumpy. Those things are normal – I spend most days and nights looking after two (quite demanding) small humans. Sometimes my husband gets home from work and all I want to do is tell him that he’s in charge now, and I’m going upstairs for a rest. If I’m honest, I might have done that one or two times.

But the thing is, he’s tired too. He’s not had a perfect night’s sleep (which may or may not be because I pushed him in the middle of the night). He’s also spent a day in a different world, working for our family. Even if I secretly want to add points and tally the score of who’s done the most to deserve rest, it’s really not about that. Some days I will be grumpy. Some days he will be grumpy. If we spend all our days being grumpy and keeping count, then the truth is that no-one wins.

Spend time together without the kids

As a parent it can be really hard to find time and space that belongs to you. Sometimes when I do, all I want to do is zone out and do things for myself. That’s important, but it’s also important to spend kid-free time with your partner as well. Time that doesn’t involve nappies or feeding or conversations about what their poo looked like today.

It might be half an hour after the kids go to bed. Or, if you’re really lucky it might be a night out while someone else babysits. Whatever it is, find time to give to each other. Hold hands. Play cards. Sit together. 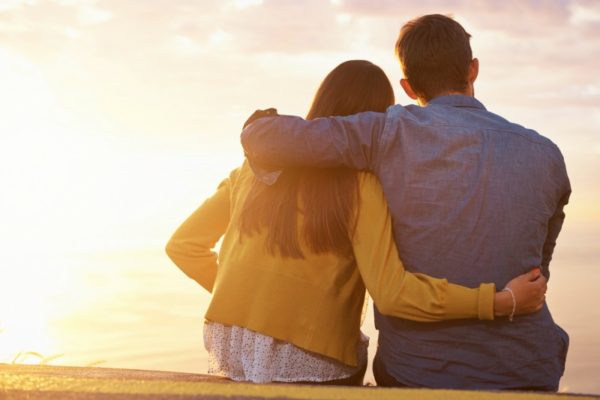 Has anyone else noticed how much a crying baby amplifies the intensity of a conversation? My husband and I will be talking about something inane like shoes, and then a child starts crying or yelling and all of a sudden it becomes heated. If tears can do that to shoes, imagine what they can do to something that you’re actually invested in. We had to make a rule pretty early on that crying means the conversation is paused.

This isn’t always practical, and sometimes you do have to work things out even in the chaos. But if it’s a conversation that can be had when everyone is more calm, just put it on hold. Chances are that the extra time to think will be good for you too.

Remember you’re a couple as well as a family

Practically, a significant chunk of the conversations that take place in our household revolve around the kids. They are wonderful, they are demanding, and they are one of the biggest parts of our life. They also exist because we, you know, had sex. Which happened because we actually really like each other.

My husband and I recently celebrated our seven year wedding anniversary. We went out for dinner and we talked about things that weren’t child related. And I was reminded again that he isn’t just the father of my children. He’s the man that I chose to spend my life with. Even though we’re mum and dad most of the time, it’s important that we remember that we’re also husband and wife.

Having children has changed me in ways that I never could have imagined. By extension, it’s changed who we are as a couple, and that can be a really great thing.