Do you find yourself lying awake at night thinking about all the things you have to do tomorrow while your partner sleeps soundly beside you? You aren’t alone.

According to the 2019 HILDA report, men are doing more domestic work now than they used to, but women are still carrying the brunt of the load.

And while some say women are better multitaskers, this has been disproven (no one is good at multitasking), and the truth is that it all comes down to time and how it’s valued in a household.

Eve Rodsky is an organisational specialist. She believed that she was in an equitable relationship – until she had kids and discovered she was responsible for the majority of her family’s care.

“This is not how I envisioned my life”

The breaking point for Eve was a text about blueberries – but as we all know, it’s never just about the blueberries.

“I found myself sobbing on the side of the road,” says Eve. “My husband sent me a text that just said, ‘I’m surprised you didn’t get blueberries.'”

“I had a breast pump and a diaper bag in my passenger seat. I had a client contract – because I’m a lawyer and a mediator – on my lap with a pen in between my legs trying to mark up the contract at every red light racing to pick up my two-year-old.

“I had to pull over because I was crying too hard. And as I was crying, I was thinking to myself, ‘I used to be able to manage employee teams and I can’t even manage a grocery list.’ And more importantly, how did I become the default, or what I like to call the ‘shefault’, for literally every single household and childcare task for my family?”

Next, Eve embarked on a quest to find a solution for domestic rebalance. The result? Her new book: Fair Play.

In a nutshell, Eve explains that Fair Play helps couples to “have difficult conversations around values and expectations that make it fun and they can do it in less time than it takes to scroll your social media.” 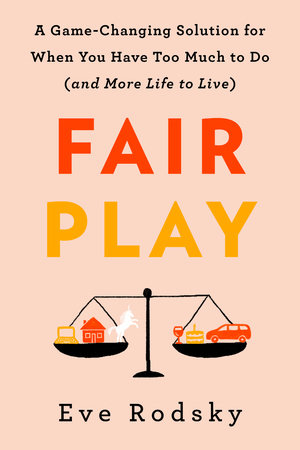 Although some women think these conversations are pointless because no one is listening, Eve says we’re already communicating with our spouses – whether we mean to or not.

“One woman said to me that if her husband forgets to take the wet clothes out of the washer and put in the dryer, she dumps them on his pillow. I have another woman who tells me that she started an Instagram account called, ‘The shit my husband hasn’t picked up’,” says Eve.

“You are already communicating about domestic life. Whether you think so or not. I’m asking for a conversation shift – not a start.”

Once women realise this, Eve says they’re “willing to engage with the concept of how to bring my husband to the table.”

“I give you some good communication quizzes. I actually even give you a paperless post. You can hand it your husband and say, ‘Here’s my invitation to you to play this game.'”

Not about the blueberries

The core of everything (it’s even one of the pre-game rules) is equal time.

“What I realised is that it’s not about wet clothes on a pillow or blueberries,” says Eve. “What I realised after interviewing 500 men and women, was that men, women, and society value men’s time as diamonds, as finite – and women’s time is infinite, like sand.

“We don’t talk about the fact that women’s time is not valued in the home. And so once you can reframe time as my 24 hours are as important as your 24 hours, things start to change.

“What I mean by that is an hour holding your child’s hand at the paediatrician office is just as valuable to society as an hour in the boardroom. And that is really the core of Fair Play.”

Fair Play is available now from wherever you get good books.