Parenting forum Mumsnet is a hotbed of dilemmas and interesting questions. One recent update about a mum who is about to relocate without her young children has sparked a lot of discussion.

A Mumsnet user shared a story about a friend of 20 years who she said has been hatching a plan to leave her family – her husband and two children – to be with a workmate she’s fallen in love with.

“She has organized a job relocation to a different part of the county and has paid a deposit for a little flat. She’s been planning this a while as she met someone (also married) through work and he plans to follow her when he ties up his loose ends.”

The woman said she had a long conversation with her friend who is looking forward to her new life and that her friend’s husband is unaware of what’s about to unfold.

“She spent an hour on the phone after she’d ‘let me in on it’ excitedly telling me about the decor she’d chosen,” the worried friend posted, “and gushing about this arsehole who’s also leaving his wife and child.”

She admits her friend has never seemed particularly fulfilled and her plans are not totally out of character.

“It hasn’t exactly come from nowhere,” she writes, “even when she didn’t work she had them in full time childcare and never seemed to enjoy motherhood.”

Knowing about her friend’s plans is confronting and now she’s unsure if she wants to continue the friendship.

“I consider myself a feminist but I’m so upset about this, her youngest is only 3,” she continues. “[Am I being unreasonable] to question a 20 year friendship over this?” 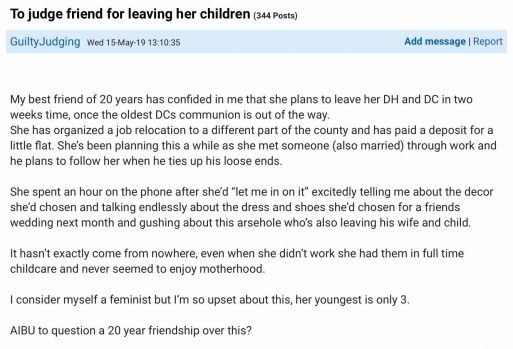 To judge or not to judge?

Commenters on Mumsnet had passionate opinions, and it’s not surprising because it’s an emotionally charged situation.

“It’s a horrible, damaging thing to do to kids and I’d say the same about a dad doing this,” one person wrote.

“This is so sad,” another commenter wrote. “I would struggle to maintain a friendship with someone who apparently plans to abandon her kids without a backward glance. But it sounds like she needs sympathy rather than judgement, she must be incredibly unhappy and damaged to do this. But no, I wouldn’t be her friend after this.”

Some wondered if there was much more at play here than a secret romance.

“So long as this isn’t a mental health crisis and this is within her bandwidth of behaviour and reasoning, the kids might be much better off without her in the long run,” someone else suggested. 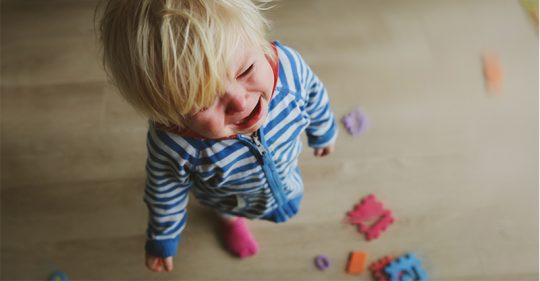 “Has she got a mental health issue? She sounds like she feels overwhelmed and needs to escape. Ask her,” another commenter posted.

“I know of a woman who did exactly this – but the man never showed up. It turned out he had changed his mind about leaving his wife,” one forum user wrote.

Lots of commenters said they knew of similar situations and that while kids are resilient, when mums leave children are impacted for the rest of their lives.

“I have a friend whose mother walked out one day, leaving her and her brother behind,” one woman wrote. “She just packed up and left, and they never saw her again. My friend is now in her seventies and has never come to terms with the sense of abandonment.”