Well, it’s happened. I’ve officially become my parents, as I just can’t seem to stop comparing my children’s lives to how my own childhood played out. I just want them to quit their whinging and realise just how lucky they are they don’t have it as tough as I did.

Here are eight comparisons that have slipped out of my mouth recently.

1. “We only ate out on special occasions”

Forget about babyccinos at the local cafe, regular dinners at pizzerias and take-aways from McDonalds or sushi trains in shopping centres. Eating out (or even bringing something home to eat) was considered a real treat and only happened if it was someone’s birthday, Mother’s Day, or a family member was in town. My husband didn’t eat out at a restaurant until he was 16 years old for crying out loud!

My mum was a great cook and prolific baker so any sweet treats were homemade. Our snack options were good old fashioned fruit, nuts, or crackers with Vegemite and cheese. There was none of these individual snack size packets, loaded with sugar and salt! No wonder the world is drowning in plastic and there is an obesity problem. (I’m really sounding old, aren’t I?) 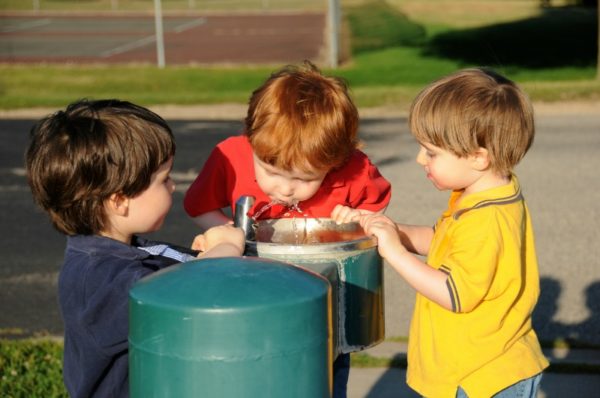 3. “We never carried a water bottle”

Sometimes my kids carry on as if they’re dying of thirst in the desert because I forgot to bring their water bottle to the park or out on an errand. I know it’s important for kids to drink water (and I’m glad they do!), but it’s like they’ve never heard of a bubbler, or a tap, or waiting 10 minutes until we get home.

I certainly wasn’t deprived in the toy department (although I did never get those Sylvanian Families figurines I was dead keen on), but I had a fraction of the amount my boys do. And everything I did have, I took great care in looking after it to be sure it didn’t break and packed it all carefully away after every play. Rip, tear, bust is my kids’ motto – after a short time of play it’s either broken or abandoned. If I have to pick up one more LEGO man head or arm off the carpet I’m going to lose it I swear.

5. “Our TV was tiny and only had a few channels”

Yes that’s right, there was a time before households had multiple large television screens and on-demand streaming services. My kids are so used to watching whatever they want, whenever they want, in high definition without having to squint their eyes or crane their neck. They will never know the pain of having to rewind a VHS tape, not being able to pause live TV and having to run for the toilet in the ads instead, or having to wait ages for your favourite movie to come back on telly. Nope, this generation will never get it. Remember having to go into an arcade and put your hard-earned pocket money into a machine so you could play Pac-Man or Frogger? And when you died that was the end of your game, unless you had another 20 or 50 cents to spare. None of this X-Box, Wii, iPad, Minecraft, Angry Birds, Roblox shenanigans. Games were not that accessible unless you were lucky enough to get a Game Boy or something similar from your parents – even then it still needed batteries and you had to wait for a birthday or Christmas to come around so you could get more games to play.

7. “There were no mobile phones”

“Just ring Daddy now and ask him.” “Can I watch something on YouTube while we wait?” “Let me check the weather app.” Do these sound familiar? When I tell my kids there were no mobiles when I was younger and that we had to use the home phone, a pay phone or just wait until we saw someone to talk to them – and that we had no Google maps, videos, games, or weather forecast at our fingertips either – they just stare at me incredulously as if I’m making it up.

8. “We had to entertain ourselves”

Sure, my parents did make playdough, sing songs, read books and play games with us when we were little, but only for about a third of the time our kids expect us to play with them. For the most part my sisters and I were left to our own devices (within earshot) to make up our own games, help Mum with cooking or washing, do colouring-in, or puzzles – and it didn’t involve guided entertainment via a screen either!

So even though I cringe a little bit when I hear myself start to compare my children’s childhood with my own (just like my parents did with me), I don’t think I’ll be breaking the habit anytime soon. Even if my kids roll their eyes every single time, maybe there will come a time when they stop and think for a moment about how good they really do have it and be a little more grateful.

Do you compare your childhood to your kids? What things do you tell them? Share your stories on our Facebook page.