Anyone with children wanting to find some pearls of parenting wisdom from John Marsden’s latest book The Art of Growing Up had better gird their loins.

John opens his book by emphasising the importance of parenting by laying most of society’s ills at the feet of mums and dads who have engaged in toxic parenting.

And while he acknowledges the impact of intergenerational trauma in how some carers abuse or neglect their children, he’s really talking about over-indulgent middle-class parents.

Which is to say, most of us.

John Marsden is best known as the author of the Tomorrow series for young adults, but he’s also the principal of two schools in Victoria. Over the last two decades, he’s seen a rise in children not being allowed any sense of independence and at the same time increasing levels of anxiety and panic attacks in kids.

“We joke about helicopter parenting but it is actually a really toxic way to bring up children, to be hovering at their side 24/7 monitoring, regulating, controlling everything that they do and the attitudes and the values that they hold. So you do have to step back. You have to keep it in perspective.”

It’s not the first time these kinds of views have been expressed. Jonathan Haidt has talked about the impact of similar types of parenting on young adults today. Adults who find it difficult to navigate the modern world.

Does this make me a ‘toxic’ parent?

I found The Art of Growing Up an uncomfortable read. On one hand, I felt that it over-generalised and made the parenting experience very black and white. I don’t agree (as John purports in the book) that every evil person (from Hitler to Stalin) was created by bad parenting. It’s outdated and wrong-headed to lay all the blame at the mother’s door, and while John says ‘parents’, it is usually the mother that ends up at fault.

But while I don’t agree with every sentiment in the book I know that on many levels he is right.

I don’t let my children, now seven and five, play in our communal backyard without me. I have been peeling mandarins and getting drinks for my kids well past an age they could do it themselves. And I am definitely one of the parents who stays at the party instead of dropping off. All of these things are important phases of ‘growing up’ and freedoms that they should be allowed to explore. 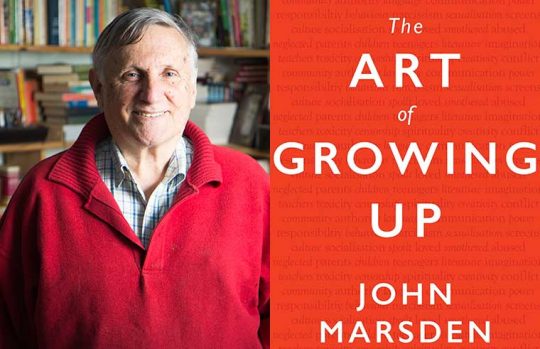 The complexities of modern toxic parenting

Here’s the thing though. As with most things in life, parenting is not something that exists out of time and place.

While John acknowledges the influence of our own parenting experiences, he doesn’t consider the particular forces that are shaping parents today.

Jonathan Haidt talks about how the increased media coverage of child abductions from the ’80s on, made parents fear danger to their kids that was out of step with reality. Add to that the 24-hour news cycle with stories like William Tyrell’s disappearance and the appalling discoveries of the Royal Commission into Institutional Responses to Child Abuse and it’s no wonder that many parents hold a tighter rein on what their children do.

Then there are all the other books telling us that parenting well is actually feeding our kids the right food, turning off all the screens, making sure they’re sleeping enough etc. etc.

And then there’s social media.

It’s a lot. And while we could all stop following the influencers, stop reading the books and ignore all the people telling us we’re doing it wrong – it’s hardly realistic to expect everyone to live that way. We are shaped by the world around us as much as anyone else.

The antidote to toxic parenting

Parenting has intensified, with too much information and too much judgement. It’s hindered our ability to tap into our intuition, and what works for our own, individual family.

The end result is what John sees as toxic parenting today. Parents who don’t let their kids experience fear, who get over-involved in their schooling and friendships and have sacrificed their own interests to support those of their child.

It seems to me that the antidote to toxic parenting is for everyone to relax a bit more. To step back and embrace the freedom that comes with imperfect parenting.

So while I may do a few of the things John identifies as “toxic”, since speaking to him I have started getting my kids to do more things for themselves. I’m thinking about how I might bring more independence into their lives.

There’s definitely something to be gained from listening to John’s advice, as long as you remember that parenting is not black and white, and that we’re all doing the best we can with what we have.