My youngest started childcare recently and oh my goodness, THE EMOTIONS! Being my third child I thought I was an expert in this area but I was really surprised by what went down.

Here are all my top feels that you too might experience when your last bub heads off to daycare.

Oh the tears! From me, not him. He’s my baby! And at 15 months he’s still so small. We took a photo of him before he went off with his little bag and our hearts practically broke into a thousand pieces on the spot. Wasn’t he only just born the other day? How is it that he’s so grown up now? I could not deal, seriously. He on the other hand was ready to rock out with all the other kids and get crazy with all the new toys and things to explore. See ya, Mum!

Was he going to like it? Just because he seemed happy at drop off doesn’t mean he wasn’t bawling the minute I left. Would other kids push him over or steal his food? What if they gave him something he didn’t like for lunch? What if one of the carers was a psycho who hates kids? Would he miss me? Would he be able to sleep? Would he think I’ve abandoned him? Did I pack his favourite toy and sleeping bag? I better ring and check. It’s been less than a year since my middle child was in daycare so you’d think I’d remember what’s what. WRONG! I feel like a complete newbie parent stumbling in the dark. I can’t remember the name of the class my baby’s in, I keep forgetting to sign him in and bring things like fruit and spare clothes. I was all over it with my other kids when they were in childcare, but now? I’m lucky if I remember to take him on the right day.

Wow so many memories have been flooding back from when my other two boys started daycare, particularly my first son. I remember so many difficult drop-offs. He was a lot younger and couldn’t even sit up properly by himself WAAAAA! – see first point. 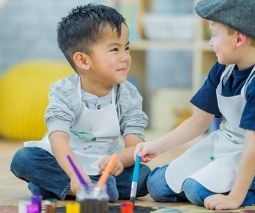 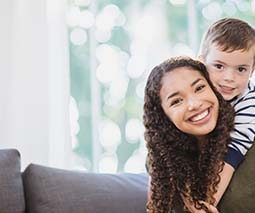 Tears aside, my son looks super cute heading off to preschool with his big bag and shoes. He might still be giving Bruce Willis a run for his money when it comes to baldness, but he’s all over it in the social department! I’m so proud of him how well he’s been handling the change (even though he has had a few teary drop-offs lately due to him not feeling well).

GERMS! I’m scared about all the illnesses my little one is going to pick up from daycare. It’s a given after all – grubby hands, snotty noses and kids sharing water bottles. There’s probably a child sneezing and coughing all over my son right now, or poking him in the eye with a diseased ‘hand, foot and mouth’ infected finger. Agh! Did I send him too early? Could I not have held off a bit longer and used more family support instead? Surely I could have waited until he was closer to school age. He would have been better off at home still with me all the time – right? Truthfully, you know it’s necessary and that they have a great time there, but you just can’t stop the guilt. Ever.

My husband and I can now dedicate more time to work and other house responsibilities, which is really needed for a family of five. My son is also a very busy little firecracker so it’s nice to have a bit of space to clear my mind a few times a week too, knowing that he’s getting lots of stimulation and interaction which will help his development too. I can now concentrate on getting some of myself back again as well, which is important for whole family because after all if mum is running on empty, then so is everyone else. And I’m sure the teary thoughts will stop soon.

How do you feel about sending your last baby to daycare?