Here it is! The anti-Christmas gift list for all parents of babies, toddlers and other little ankle biters. So before buying anything for the bleary-eyed new mum or dad in your life, make sure you check it’s not one of these seven doozies first!

Who needs a fandangle alarm clock when you have your own living and breathing one? If parents are not already getting woken up at the crack of dawn from their baby crying for milk, it’ll be the toddler poking their eyes at 5am because they want to watch Peppa Pig. Not only completely useless for the new mama or papa who rarely sleeps, little kids will love pulling it out from the wall and setting the alarm to blare loudly at 3am (where do they pick up these crafty hacking skills??).

Nice white linen pants, a crisp cream shirt or a beautiful ivory sun dress? FORGET IT. Parents won’t be able to go even two steps after first putting something like this on without a little person placing their grubby hands all over it. Baby vomit, thrown food and poo are also potential stain offenders. The same goes for white tablecloths, tea towels, bath towels, sheets, dressers, couches, rugs and anything else that offers a nice fresh blank ‘canvas’. And if it’s not the children messing up the white, it’s the sleep deprived parents themselves spilling cups of tea and wine everywhere. So please – no white Christmases this year.

This seems like a good idea – think of all the family movies they’ll be able to watch! Well, only if it stays untouched. Kids just LOVE standing with their noses literally touching the screen (which makes no sense considering how large TVs are now with perfect clarity). They also love touching it (thinking that it’s going to move the image like with an iPad), pushing it in a toddler rage, or press all the buttons and plugs so many times the whole thing craps out. So unless this new baby is going straight up onto a high wall, forget about it.

While we’re talking about breaking stuff, we may as well rule out ANYTHING that has the potential to smash or be ruined in the hands of a sneaky toddler. Glass vases, precious ornaments, new smartphones or tablets, expensive music speakers, designer sunglasses … the list goes on. Almost nothing is safe unless it’s locked away, so think you before you buy people! 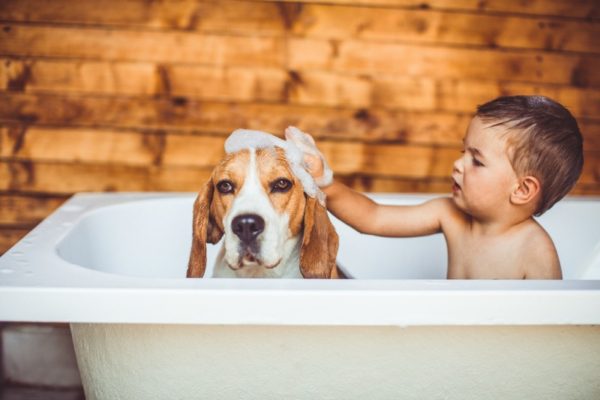 Mall Santa confessions: “The weirdest things kids have asked for” Make it a meaningful Christmas. 6 great ways to teach kids to give back Do you not think they have enough sh#t already in their lives? And even if the kids are now all toilet trained, there’s still going to be bed wetting accidents so the last thing they need is yet another member of the family requiring their poo cleaning up. Dogs also need to be bathed, fed, taken for medical check-ups, entertained and exercised – just like another baby.

Even if the family is musical and this seems like a super fun idea, PUT THE DRUMSTICKS DOWN. Children will bash that thing day and night so much that parents will slide into a psychotic rage faster than you can say ‘whiplash’. And they might possibly get evicted from their neighbourhood too.

Are you the devil? Don’t you think their house is messy enough without adding slime to it? This gooey stuff gets everywhere and is a nightmare to clean up. It’s two seconds of fun for preschoolers (who, of course, love it for exactly two seconds only), and then it’s a clean up party for one – mum. No thanks!

What other gifts do you think parents of small kids don’t need this Christmas?