Many expectant mums won’t find out if they have developed gestational diabetes until they are at least 24 weeks into their pregnancy. But there are plenty of things mums-to-be can do to help lower their risk of developing it.

We speak to the experts to find out why nutrition in pregnancy is so important.

What is gestational diabetes?

Gestational diabetes is a form of diabetes that occurs during pregnancy and affects about 12 to 14 percent of pregnant Australian women.

Australian Diabetes Council spokesperson, Melinda Morrison is a diabetes dietitian. She explains that during pregnancy, some of the hormones produced by the placenta to help baby grow and develop also reduce the action of the mother’s insulin.

“Insulin is the hormone that allows glucose from the bloodstream to enter the body cells and be used for energy,” Melinda says. “This means that during pregnancy, women need to make two to three times as much insulin to keep blood glucose levels in the normal range. If the body isn’t able to produce the extra insulin needed, blood glucose levels rise and gestational diabetes develops.” Who is at risk of developing gestational diabetes?

There are many reasons why some women develop gestational diabetes but Diabetes Australia says those with a higher risk include women who:

How to reduce your risk of developing gestational diabetes

“Some of the risk factors for gestational diabetes are things you can’t change, such as age and family history,” Melinda says. “So focusing on the things you can change such as healthy eating, regular physical activity and aiming to be a healthy weight before pregnancy are some of the things that women can do to reduce their risk.” 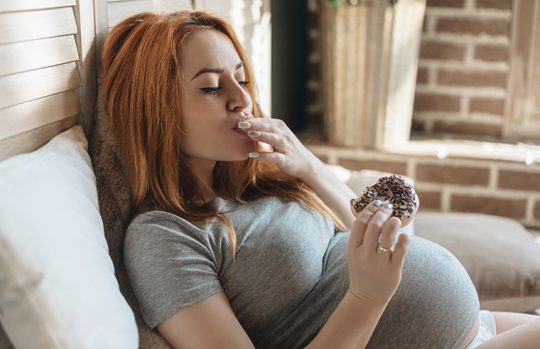 Aiming for a healthy weight

Melinda says aiming for a healthy weight, or as close as possible to your healthy weight range, before pregnancy can help reduce the risk of gestational diabetes. She recommends women speak to an accredited practising dietitian for individual advice.

Melbourne dietitian Melanie McGrice shares other positive steps women can take to help reduce their risk. Here are her top tips for lowering your risk of developing gestational diabetes by maintaining a nutritious diet and lifestyle.

This means having a diet that includes all the core food groups while keeping in mind food safety in pregnancy.

Having small regular meals throughout the day, as opposed to two or three large meals, will keep blood glucose levels steady and avoid spikes.

Start by avoiding sugar and sugary foods such as lollies and soft drinks and steer away from pastas.

Dairy is a great low-GI option and for other favourite foods, try swapping for lower GI options such as:

“I totally understand that thinking but the research doesn’t support that. There are so many health benefits of exercising throughout pregnancy, it actually reduces the risk of miscarriage and reduces the risk of gestational diabetes. Unless you have a particular medical condition such as pelvic instability, you shouldn’t avoid exercise during pregnancy.”

5. Get a good night’s sleep

Melanie says research shows getting less than seven hours sleep a night puts anyone at a higher risk of gaining weight. “The research shows quite clearly women getting less than seven hours sleep are likely to gain weight because of the impact to their appetite hormones and a whole range of other factors. And pregnancy is quite commonly a period where many women experience a lack of sleep.”

Melanie adds that women need to take time to get the proper rest they need and make their health a priority. “Many of my clients who are pregnant are women trying to do it all – maintain a normal life, which often means working full-time, running a household and maintaining an active social life on top of pregnancy.

“While we shouldn’t have to wrap ourselves in cotton wool, I do think when we are pregnant we have to put our health first. We need to make our health a priority so allowing time for meal preparation, exercise and sleep.”

What if I am diagnosed with gestational diabetes?

If you have been diagnosed with gestational diabetes, Melanie says it is crucial you get expert guidance. “It is really important, if you are diagnosed with gestational diabetes, to see a diabetes educator and an accredited practicing dietician because it is very important to measure your blood glucose levels on a regular basis, which is usually a couple of times a day.”

“A diabetes educator or endocrinologist will guide you on how to monitor your blood glucose levels and a dietician will help come up with a diet to get your readings under a recommended level. There is usually a tight range for women who are pregnant and so, if they are not able to meet that range, we usually put them on insulin injections right away because having high blood glucose levels during pregnancy can impact your baby.”