A long time ago, in what feels like a far, far away pre-internet galaxy, a seven months pregnant Demi Moore posed naked for a Vanity Fair cover shoot. The resulting image was named one of the 100 most influential images of all time, and it really was groundbreaking, taking pregnancy into supermarket aisles and news stands like never before.

The image, photographed by Annie Liebowitz in 1991, not only popped up in supermarkets, the world’s media picked it up and it was beamed into lounge rooms and talked about over airwaves across the globe. A long feature on Demi was tucked inside the mag, but everyone was talking about the cover shot instead.

At the time, 28-year-old Demi Moore was a huge star, married to Bruce Willis and pregnant with her second child, daughter Scout (pictured below, now 26). The photo was deemed scandalous and even indecent by many, despite Demi’s modest placement of her so-called “hand bra”.

Snow ? White I’m coming for you

In this age of breaking-the-internet style nudity, it’s hard to imagine how up-in-arms people were about this cover. Many retail outlets wrapped the magazine in paper, calling it borderline pornographic, and media crews staked out the Vanity Fair offices chasing comment from insiders as outrage swirled.

Then Vanity Fair editor Tina Brown says she thought the cover would garner attention, but had no idea just how much.

“I was absolutely blown away by the reaction. I remember before publishing it saying to the [Vanity Fair] PR department, ‘Maybe we can get it on the Today show.’”

“Little did I know it would become a media sensation, on every radio, TV and newspaper outlet — not just in America but all over the world,” Tina recalls.

Photographer Annie Liebowitz says the Vanity Fair folk had a very clear vision for this shoot, and provided a whole bunch of couture gowns, diamonds and slinky robes for Demi to wear. The agreed look was “glamorous and sexy”.

Annie and Demi were already quite the dream team, having worked together several times before. Annie shot Bruce and Demi’s wedding, and also photographed the couple when Demi was pregnant with her first baby, Rumer.

“I think pregnant women are beautiful,” Demi later told journalist Roger Ebert. “When I was pregnant with Rumer, my first child, Annie Leibovitz, who did the Vanity Fair cover, photographed me naked just for our family, and we have these photographs up in our home where anybody can see.” For this now-notorious Vanity Fair shoot, Annie shot a number of images of Demi in the provided wardrobe (those are seen in this issue of the magazine too).

Then, towards the end of the day once the brief was in the bag, she decided to take some more intimate, nude photos, just for Demi and family.

“The fully nude picture was not taken until toward the end of the shoot and was intended just for Demi,” Annie said. “I was taking some companion photographs to the ones I had made during Demi’s first pregnancy.” 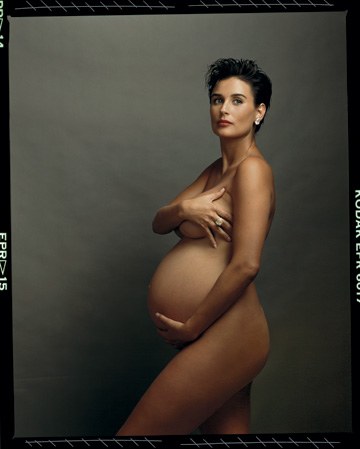 It quickly became clear to Annie that they were onto something special.

“As I was shooting, I said, ‘You know, this would be a great cover,'” Annie recalled later.  “It wasn’t until I got back to New York and looked at the proofs that I realized that there really was a great cover photograph there. Tina agreed.”

Editor Tina Brown was certain Demi would nix their cover idea, but Demi instantly agreed the naked photo was the best of the bunch. Off to the presses the issue went – and the rest is history.

Interestingly, Annie’s not a huge fan of the photo that sparked millions of conversations around the world.

“It was a popular picture and it broke ground, but I don’t think it’s a good photograph per se,” she explained. “It’s a magazine cover. If it were a great portrait, she wouldn’t be covering her breasts. She wouldn’t necessarily be looking at the camera … My best photographs are inside the magazine.”

your fav 4 sisters are back!!!! #givinthenk

When quizzed on how she felt about the photo and the surrounding controversy, Demi Moore said it was a bit bewildering and admitted she could not fathom how people could find the image upsetting. She pointed out that there were far more offensive titles openly displayed on news stands, and questioned the outrage gang’s true motives.

“I was stunned at some of the negative responses. That people found it pornographic, or they thought it wasn’t family-oriented. I think it’s so interesting that they’ll have other nudie type magazines out there, but the fact that I was pregnant would all of a sudden be something that isn’t family,” she told Roger Ebert.

“Magazines with titles like Guns and Ammo are displayed on all the newsstands, and they represent taking life away. I was representing life, yet I supposedly wasn’t appropriate,” Demi pointed out. “People think motherhood is wonderful, but it should be left behind closed doors, or whatever. It’s stunning. I can hardly believe it.” Since this cover, a whole industry has sprung up to capture pregnancy in all its glory and bring it out from behind closed doors. Attitudes to beauty, sexuality and pregnancy have also shifted dramatically. #FreeTheBump

Unsurprisingly, Demi’s fairly natural cover inspired a whole lot of copycat shoots – with a lot more Photoshopping –  including one featuring Bruce Willis himself.

And – in the most high-profile before and after ever – Demi posed “naked” for Vanity Fair 12 short months after the More Demi Moore shoot, this time in body paint for Demi’s Birthday Shoot. Demi and Bruce’s daughters – Rumer, Scout and Tallulah – have their own movement going on. They’ve jumped from magazines to Instagram, with all three sharing their lives pretty openly, 26 years after their mum’s famous and ground-breaking cover.