One hundred and three thousand couples in Australia experience pregnancy loss but until now there’s not been an organisation specifically aimed at helping them. We spoke with Samantha Payne, co-founder of The Pink Elephants Support Network, about why grieving a miscarriage is a bigger mental health issue than most realise, and how you can get the support you need.

According to Samantha, every day in Australia 282 women report pregnancy loss before 20 weeks gestation. One in four pregnancies will end before 12 weeks and one in three pregnant women over the age of 35 will experience pregnancy loss. However, a lot of these women have to deal with their loss silently.

The mum of two is no stranger to loss herself, having sadly suffered two miscarriages when trying for her second baby. At the time she was really struggling but found there was no organisation that dealt specifically with this type of early loss. She just didn’t feel comfortable sitting in a room with other women who had lost their babies much later on, and found there was a real lack of support out there for women like her.

It wasn’t until she reached out to a friend of a friend on Facebook, fellow co-founder Gabbi Armstrong, that she found the emotional support she needed.

“Gabbi totally understood it because she’s been through miscarriage herself and she became my peer support person. After several years we decided that other women deserved to have this level of support too. There just needed to be more help for others going through this,” she says. Together they set up the newly launched Pink Elephants Support Network non-profit organisation for women who have experienced early pregnancy loss. It offers six free support sessions via a phone call from the comfort of your own home with a Peer Support Ambassador – another woman who has suffered miscarriage herself and undergone professional bereavement counselling training. If after these sessions you still need help you will be referred to a mental health care worker.

There is also a private Facebook group where women can share stories with each other, plus their website offers a number of different brochures and resources you can download for free such as a miscarriage survival guide, advice on how to tell children about your loss, what to say to someone who’s had a miscarriage, and more.

Read more about dealing with miscarriage:

According to Samantha, their focus on early pregnancy loss and personalised approach in a safe, convenient space is what makes their organisation so different from others.

“Miscarriage is different from child loss, you’re mourning your lost hopes and dreams,” she says. “Our platform allows women to access free support easily from their own home, even if they live regionally, which can also be a lot less intimidating. With other organisations you also get different people each time you call up so you have to repeat your story all the time which in itself is a trigger, so our Peer Support Ambassador model makes it much more personal and individual.” 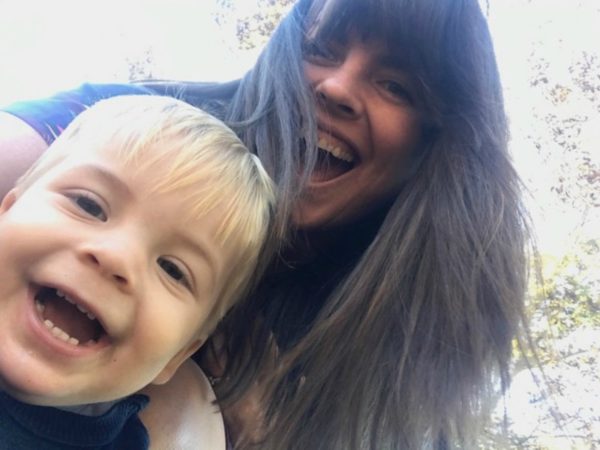 Samantha and Johnny, her ‘rainbow baby’ after her miscarriages

Apparently 70 percent of women after miscarriage do actually go on to have a healthy pregnancy, but 30 percent of these will have a clinically diagnosed case of post natal depression or anxiety. Samantha believes this is because of the lack of emotional support available and validation of what they’re feeling around their previous loss.

“Miscarriage is not very talked about, it’s shrouded in silence,” she says. “Women have a feeling of guilt yet nowhere to express it and so they internalise it. For many it’s also the first time they’ve ever experienced bereavement so they need special help to get through this. It’s real grief, it’s a mental health issue for women and they deserve support.”

While The Pink Elephants Supports Network is focused primarily on helping women currently suffering from a pregnancy loss, Samantha says that with the ambassadors it’s also a great way for other women who have experienced a loss themselves previously turn this into something positive by supporting and giving back to other women.

And it’s not just the women who suffer from miscarriage, which is why they also have a free resource aimed at men on how best they can support their partner and understand what she’s going through. At the moment the organisation only has female ambassadors however in the near future Samantha says they aim to also have some men on board to better support partners who may too be suffering.