A tweet re-shared on Facebook has sparked a barrage of brilliant stories about the surprising-slash-alarming ways that hormones can shake us up.

The Holy Flaps page resurfaced this important discussion and we are thanking our lucky stars that they did. In fact, we read pretty much every comment and have reproduced a bunch of them here for your reading – and sniggering – pleasure.

Be careful if you are reading on the bus/at work/in the queue at the bank because uncontrollable giggles may ensue.

“Had a complete mental breakdown because I’d bought the wrong size prawns. Threw prawns around the kitchen in a rage, slipped on one of them and fell over. Lay on floor surrounded with prawns and crying.”

“I threw a whole tray of chicken nuggets into a bush…then picked them all out and ate them whilst crying in the garden.”

“Hit the toaster out of the back door using a frying pan as a bat.”

“After the birth of my youngest, I kept forgetting the name we’d chosen to give him. Everytime someone asked what his name was I’d burst into floods of tears. This went on for 3 weeks.”

“My husband once farted so loud and it scared me so much I cried. Because he laughed so much I cry-raged that I wanted a divorce, and told him we needed to put the house on the market. Then I cried because I’d be homeless. Because of a fart.”

“I growled and showed my teeth (like some rabid f*king wolf ) when my ex put his hand out to take one of my profiteroles. It shocked me as much as it did him.”

“I was heavily pregnant and NEEDED cheese, went to Sainsburys to be beaten to the last packet of Cathedral City. Fumed that much I stalked the cheese thief until they weren’t looking and took it out their trolley and waddled off to the tills as fast as my fat feet would carry me!”

“I cried for over an hour and threw all of our kitchen utensils out when I burnt some parsnips, declaring that I was never going to cook a single thing ever again.”

“Just after I had my first baby I was making a cuppa and then started sobbing coz I couldn’t remember if I’d put sugar in my tea or not. Then I absolutely broke down when I remembered I don’t even drink tea.”

“Pregnancy – I wanted a baguette so badly that I DROVE TO FRANCE.”

“I grounded my 14-year-old son for sneezing too loud.”

“When I was pregnant I hot footed it out into the street to catch the ice cream man and when I got to the line I told him that I loved to hear him coming.”

“Tried to destroy a tin opener with a hatchet that really devastated me with anger when it wouldn’t open a steamed chocolate pudding.”

“Laughing crying because (when pregnant ) I thought I’d shaved both my legs in the shower (very hard work FYI) and it turned out I’d managed to shave the same leg twice.”

“Tore a laptop in half, threw the screen at the wall then smashed the keyboard up on my coffee table for crashing when I was trying to order my son’s Christmas prezzy.”

“I tried to clear a blocked vacuum cleaner hose with a broom handle which put a hole through the side of the hose so I threw the entire vacuum cleaner out of the house onto the front lawn like a psychotic Olympic shotput athlete.”

“My printer at work wasn’t working despite every effort to make it work, so I got up onto my desk and kicked it off.”

“A friend aimed a frozen leg of lamb at the back of her husband’s head. Bang on target, nearly killed him.”

“I kept crying for like 3 days because I missed Craig. I cried at home, I cried at work, I cried in the day, I cried at night. Craig is my partner’s boss who I’ve met once.”

“I cried during pregnancy with my twins as the water in the puddle in the front garden wasn’t with the rest of the water in the sea….. days it took for me to stop feeling awful about the lonely puddle.

You can read hundreds more of these in the original Facebook thread. 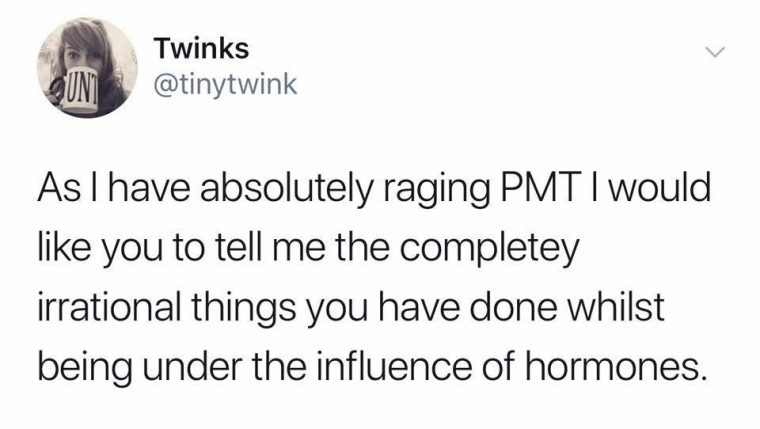