While it’s almost always clear to both parties when a relationship is in trouble, but for couples with children it can be much harder to know whether separating is best for everyone.

We spoke to Elisabeth Shaw, the CEO of Relationships Australia NSW, to find out what couples can do when they feel they’re in trouble, what the signs of ‘irreconcilable differences’ might look like and how couples can work out whether it might be better off if they separated.

“Often, when someone finds themselves at that binary point of ‘should I stay or should I go’, there’s been lots of thinking on the issue beforehand,” Elisabeth says.

If you have the foresight, it’s actually much better to start tackling relationship issues as soon as they crop up.

If you are in a heterosexual relationship and opt to see a couple’s counsellor (which is a brilliant idea) Elisabeth notes that there can often be a disconnect in the way each sex approaches it.

“There is some research that says that women are four times more likely than a man to have discussed relationship concerns before they get to counselling,” she explains. “That can lead sometimes to a couple’s experience where the woman can say, ‘Well, I was ready to talk and I had all my thoughts organised and he was stumped’.”

It’s important to note that this ‘stumped’ default is not always due to a lack of concern from the male in the couple, but a lack of opportunity to ‘workshop’ his feelings ahead of time.

“There are times in your relationship that are not very lovey-dovey, particularly when you’ve got young children,” she points out.

“The things you loved about your couple time might mostly be missing in your parenting time. You may be disappointed in how your partner is managing that or the help you’re getting. You might be in bad shape yourself.”

“I think there’s a whole lot of things that can make it feel very tightly wound. So looking at the context saying, ‘Well, when did we last do anything for our relationship? Have I conveyed my feelings?’ is helpful.”

“I think you can really get into a bad place and start to raise things badly, put it out as a test or a challenge rather than a genuine desire,” Elisabeth said. How do you know it’s over?

“I see couples that present a whole range of problems that technically can be solved,” Elisabeth revealed.

“I’d have ideas about it. There’s things they haven’t tried. There’s lots of possibilities. But sometimes I say, ‘What reasons do you have that work?’ And the couples that say, ‘We love each other, couldn’t bear to be apart’ … you know, there’s a reason.”

And what does the flip side of that look like?

“If it’s, ‘Well, we really should stay for the children and we never wanted to divorce’. Or sometimes you can hear that doing the work would be a compliance regime, rather than a ‘We’ve really got something to hang on to here’,” Elisabeth says.

“It’s about whether [wanting to break up] remains a consistent feeling over time and it’s best judged, I think, after you have tried all the sensible things people try.”

“If you’ve seen a good counsellor – where you’re sitting there and you can hear it’s technically a good process, the person’s competent – we’ve engaged, we’ve turned up to sessions, things have changed. But you know what? I don’t feel any better. Technically, I can see them working. We’ve done some great stuff. I don’t feel the same. That’s really the spot to make a decision.” 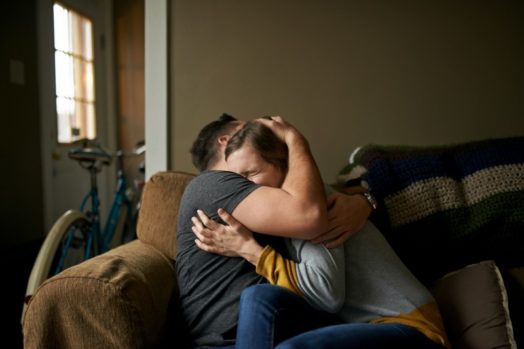 Working together can pay dividends

Elisabeth says that sometimes couples haven’t even begun to untangle their problems when they think things are at their worst.

“Often people haven’t brought their partner into their concerns,” she explains. “Their partner often will have the same concerns. Not always, but often. But just for whatever reason, haven’t raised it.”

“Sometimes that’s really good to hear, too, because if your partner says, ‘Yeah, I know we don’t do all of those things. But what I hold on to is these five things.’ That could be also a really interesting perspective because you could think, ‘You know what, you’re right. I should be valuing those things more. I’ve done my own head in.’ So I think those comparisons can be very resilience-building.”

Showing up is part of the work

While many couples fear going to see a counsellor just as some fear the dentist, Elisabeth says that her clients often find it to be a hugely positive turning point for their relationship.

“So often I’ve had people say to me, ‘You know, this has been a great relief. There’s lots of workable things. We haven’t even been really comparing notes’.”

“They can leave after the first session feeling, ‘There’s actually lots we can do’,” Elisabeth said.

“And you know, even organising yourself to turn up to a session together is work you’ve already done … So absolutely do that.”