After 18 months of  learning how to be a parent – the ultimate learn-on-job role – new mum, Jessica Abelsohn reflects on what her son has taught her.

You’re almost 18 months old now. What a whirlwind it’s been.

As I’ve taught you to walk and talk, you’ve taught me how to be a mum. But it’s so much more than that.

As we close in on a year and a half together, I’m reflecting on the months we’ve had and eagerly awaiting the months ahead of us.

So, my sweet little boy, here’s what you’ve taught me.

I’m fortunate that I’ve always been able to work around you. But in those early days, when your dad and I were both sleep deprived and you thought catnapping was a ‘thing’, everything was a strain. Cooking was exhausting, doing the washing was a nightmare, and don’t even get me started on tidying the house. I learnt very quickly that asking for help is a good thing. Having our families around meant that we could hand you over to someone else for 30 blissful minutes to catch up on some sleep. It meant we could graciously and gratefully accept a home-cooked meal when cooking was not an option. The more and more you grow, the more and more we need help. And you know what, we’re a much better little trio because of it. All hail the village!

There are routines, and then there are babies. And sometimes, the combination doesn’t mix well. You, my little one, were a mixture – sometimes routine and sometimes whatever the hell you wanted. And it took me quite a while to figure out that I couldn’t put you in a box. Babies are not robots. Some will respond beautifully to routine and others will rebel against it. While you were in a feeding routine from the get-go, your sleeping routine was a different story, mainly because you hated to sleep for longer than 40 minutes at a time, which drove your working mother mad! But we soon figured out that we had to adapt to you rather than making you adapt to us. You were going to be a catnapper, and I had 40 minutes to do everything I needed to do. And that was that. 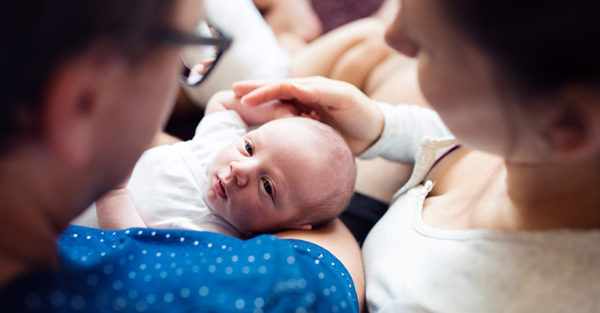 When you came along, we became mummy and daddy. We were no longer just husband and wife. Suddenly, our world was about you. And rightly so. Our days revolved around how long you had slept, how you had eaten and how many poos you’d done. I don’t think we fully understood just how much we would talk about poo. But you know what? In time, our lives became about us again. And mummy and daddy became mummy and daddy, husband and wife, man and woman – working parents, chefs, cleaners and playmates. When the newborn dust settled, we found ourselves talking less and less about how much you had slept, and more and more about how our days had been. How work was going, how we were feeling, how our families were. We found a balance between talking about poo all day, and being adults who sometimes live in a child-centred world and sometimes live like grownups. It’s been the most enlightening experience in the world. Because we know each other. We can work around each other and with each other when it comes to you. We’re truly a team.

You want to know a secret? Parenthood is bloody hard. It’s exhausting, it can be stressful, it’s demanding and it’s draining. Parenthood is not just nap time, playtime and giggles. It’s also illnesses, sleepless nights, tantrums and arguments. It’s saggy skin and rolls that won’t budge. It’s bags under the eyes, lots and lots of caffeine and a constant state of mess. Parents need to have superhero powers in organisation, mediation and hearing. They need to be able to figure out the difference between a hungry cry, a tired cry, a frustrated cry and a nappy-change cry. And as you grow, there will be a whole new range of things to figure out and even more superpowers to acquire.