Duchess Meghan is predicted to shelve engagements and head off on maternity leave at the end of the month. 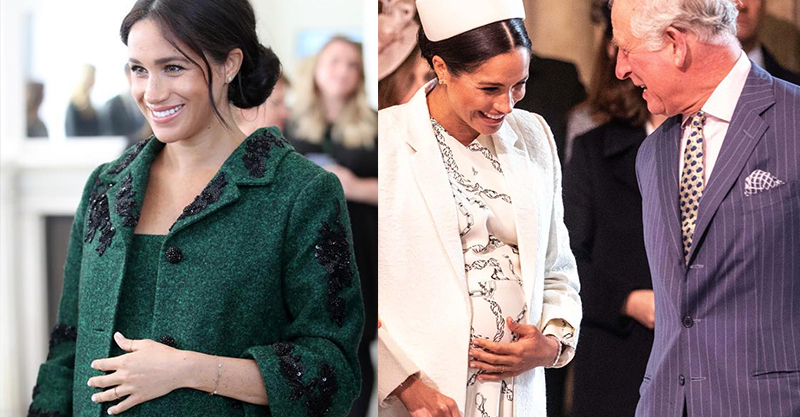 Winding down, puffing up!

For now, though, she’s cracking on like a trouper and cramming in as much work as possible.

Meghan and Harry headed to two events for Commonwealth Day. One was at Canada House and they then joined the rest of the royal family at a Commonwealth Day Service at Westminster Abbey.

At the Canada House event, Meghan wore an Erdem coat and Aquazzura pumps paired with a Givenchy clutch. But keen-eyed royal fans noticed there was one thing she wasn’t wearing – her engagement ring.

It was also missing at the Westminster Abbey service.

While some wondered if the ring was being cleaned, had been damaged, had gone down the drain or if it was some kind of sinister sign, every woman who has ever been pregnant knew the truth.

Meghan is in the last weeks of her pregnancy. It’s a time when puffiness and swelling hits even the best of us and of course, royal mums are not excluded.

It makes sense that the ring may no longer fit – and it’s even possible that the wedding ring she’s wearing is a sized-up version of her original one.

People on Twitter were quick to float this puffy mitts theory too.

“Like many women in their third trimester, (myself included) sometimes towards the end that engagement ring and wedding band just won’t fit! It was such a pleasure being able to get them on again about a month postpartum!” one commenter posted.

“I noticed she was glowing and perhaps has swollen fingers!” another wrote.

“We may not see it again till after the baby comes!” someone else suggested.

Meghan is glowing and looking every bit like a woman at the business end of the whole growing a baby situation.

“This crazy journey together”

Meghan’s engagement ring – which was designed by Prince Harry – has some super special features. It boasts a large diamond with two smaller diamonds set beside it. The large diamond was sourced from Botswana, where the pair had their first private getaway together early in their relationship. The smaller diamonds have significance too.

“The two diamonds on either side are from my mother’s jewellery collection, to make sure she’s with us on this crazy journey together,” Harry explained when the couple got engaged.

“It’s so important to me to know that she’s a part of this with us,” Meghan said at the time.

The Duchess of Sussex joins today's unique #InternationalWomensDay panel, convened by @QueensComTrust, to discuss the obstacles that women face and the global opportunities that could be unlocked if girls and women are treated fairly and equally alongside men. #IWD2019 #IWDxQCT pic.twitter.com/qyWsUj3aSH