It’s by no means a new letter, but considering the recent measles outbreak in Australia, Roald Dahl’s letter, written after his daughter died of measles, is still just as relevant.

The famous author wrote these words for the Sandwell Health Authority in 1986, showing his support for the (at the time) new and controversial MMR vaccine in the UK, made to provide immunity against measles, mumps and rubella.

People were scared of the unknown. What negative effects could spawn from such a vaccination? But Roald Dahl knew that any unknown was better than the possible alternative – having lost his eldest daughter, Olivia, to measles back in 1962.

His story is every parent’s worst nightmare

“Olivia, my eldest daughter, caught measles when she was seven years old,” his letter begins.

As he remembers, she was ill, but there were no signs of it being serious or life-threatening.

“Then one morning, when she was well on the road to recovery, I was sitting on her bed showing her how to fashion little animals out of coloured pipe-cleaners, and when it came to her turn to make one herself, I noticed that her fingers and her mind were not working together and she couldn’t do anything.” 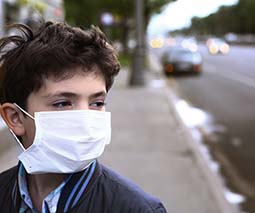 He asked her if she was feeling all right, to which she replied she was just feeling sleepy.

“In an hour, she was unconscious. In twelve hours she was dead.”

Back then, there was nothing that could be done. But today there is.

Olivia’s measles had become “measles encephalitis” which causes swelling of the brain. By this stage, back in 1962, there was nothing doctors could do to help save her life. Even today if measles progresses to this stage, the condition is often fatal.

“There is today something that parents can do to make sure that this sort of tragedy does not happen to a child of theirs,” the bereaved father continues.

“They can insist that their child is immunised against measles.”

Sometimes it takes hearing from someone who has seen the dark reality of preventable diseases for it to really hit home.

Due to rigorous vaccination, measles were very nearly eradicated from our shores – saving many parents from heartache like Dahl’s.

Surely this is a positive thing, no matter how you look at it.

Dahl’s letter ends by sharing how he has remembered his daughter in his work.

“I dedicated two of my books to Olivia, the first was ‘James and the Giant Peach’. That was when she was still alive. The second was ‘The BFG’, dedicated to her memory after she had died from measles. You will see her name at the beginning of each of these books.

“I know how happy she would be if only she could know that her death had helped to save a good deal of illness and death among other children.”

You can read the full letter here: