New guidelines have appeared on the Qantas site, explaining devices that attach to seats or between seats and rows are no longer allowed on their planes.

“To ensure the safety and comfort of all passengers, it is prohibited to use inflight travel accessories and devices which attach to aircraft seats, are inserted between seats; or otherwise block access to seat rows or aisles. When in use, these devices have the potential to impede access to seats and aisles, damage aircraft seats and fixtures, and block access to emergency equipment,” the updated Qantas Dangerous Goods and prohibited items guidelines state.

Among the now non-compliant devices that would no longer be allowed on Qantas and Jetstar flights are products like the Fly LegsUp, the Plane Pal and the JetKids BedBox.

Qantas confirms that “Examples of prohibited inflight accessories include, but are not limited to, inflatable cubes, ‘bed boxes‘, and ‘leg hammocks’. This list is not exhaustive, and the decision to permit use of a particular device rests with the cabin crew onboard.”

Possibly foreshadowing a crackdown on these gadgets which seem to have been pretty much unregulated, a Civil Aviation and Safety Authority (CASA) spokesman warned travellers that use of these devices was not to be approached casually or with entitlement.

“Never attempt to bring these things on to an aircraft without speaking to your airline first,” CASA spokesman Peter Gibson told The Daily Telegraph in mid-June.

“They do not have to accept the use of these types of devices. Second, do not attach anything to any part of the aircraft or seat. Again, if there is a reason to want to do this talk to your airline before your flight.”

It’s possible that this may be the beginning of more widespread bans on sleep devices by other airlines.

We haven’t spotted any similar updates on Virgin or Tiger Airway’s flights yet, but it’s best to check with the airline before you fly, and be prepared for the crew to make decisions at their own discretion. 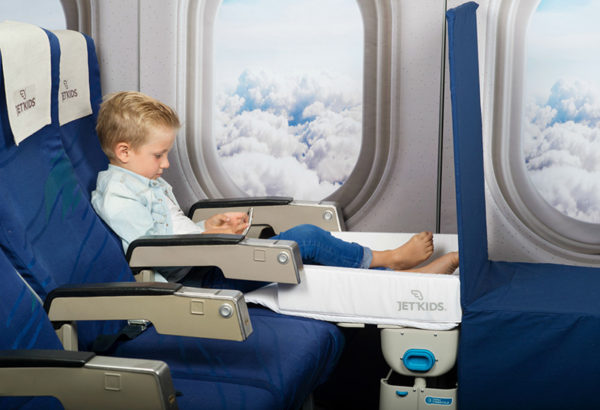 Obviously this is terrible news for the manufacturers of these gadgets, with many now in crisis mode.

Device-maker Plane Pal has confirmed that the following ‘family-friendly airlines are happy for these products to be used:

Meanwhile, there seems to be some confusion by passengers as to where other airlines stand on the issue. Air New Zealand, which previously had not been allowing PlanePal on their flights, appears to have had a change of mind.

“This is the 1st time I’ve seen the Plane Pal used on Air NZ. I’ve written to them 4 times and they still refuse to “allow” it but say they are reviewing their policy. I hope this means it’s officially reviewed!” they wrote.

JetKids BedBox have released this updated response in light of the announcement and are taking steps to get airlines to reconsider this ban on their product.

“We have reached out to most of these airlines, and have been able to identify the misconceptions they have. Some of them have promised to reconsider BedBox having been consulted on the product, and getter a better understanding. And we have some who have not given us a reply.”

Suffice to say that if you do plan to fly with a sleep-assisting device, it would be prudent to check with the crew before you get your child settled and prevent any upset.

It’s also good to note that any decisions they make are with all passengers’ safety in mind.