All babies cry of course, but a small percentage go beyond this to be extremely upset and unsettled, all the time. While this challenging phase does usually pass, parents of excessively unhappy bubs are now being warned that it could actually be a sign of future issues to come.

A new study from the Murdoch Children’s Research Institute (MCRI), has revealed that severely unsettled babies with sleeping problems, excessive crying, feeding difficulties, mood swings and tantrums at the age of one are ten times more likely to have mental health problems during childhood than their peers.

According to Dr Fallon Cook, lead researcher on the project, it’s the first evidence that for some children mental health difficulties can develop as early as infancy, with previous beliefs being they commenced in childhood or adolescence. 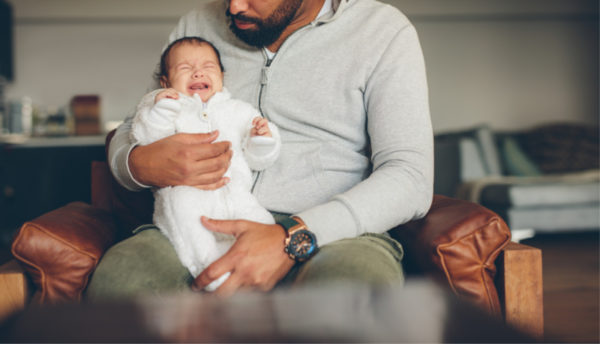 Delving into the data

The long-term study saw data collected from 1,759 children in Melbourne at the ages of 1, 5 and 11 and then analysed by researchers who were looking for links between extremely unsettled behaviour in early years and learning or behavioural issues later on.

The one-year-olds with multiple moderate to severe regulatory problems were found to have more than 10 times greater odds of experiencing significant mental health concerns during childhood compared to those babies who were settled and calm. However, only about 3.4 percent of all one-year-olds actually classify as being severely unsettled, so if you have a baby who’s only a bit difficult at times, don’t worry as they’re not considered high risk and therefore aren’t destined for future problems.

Bad sleepers not at risk

In addition to this, babies who only suffer from sleep issues and nothing else (which makes up around one-quarter of all infants), are also not at risk of mental health problems later on and will have similar outcomes to ‘easier’ or more settled babies. Phew!

“Parents with a baby who has sleep problems but no other difficult behaviours can be reassured that their baby is no more likely to experience mental health difficulties during childhood than babies who sleep well,” Dr Cook says.

Apparently, it’s only the combination of multiple severe problems that can indicate the beginning of difficulties for a child – such as emotional symptoms, issues with conduct and hyperactivity. Parents at risk too

But what about the poor mums and dads?

The research, which was presented at the Sleep DownUnder Conference in Brisbane this week, also found that mothers with severely or moderately unsettled babies were in danger of mental health conditions themselves such as postnatal depression. Apparently, 27 percent of mums in the severe group reported significant psychological distress compared to 5 percent of those with settled babies, indicating that more awareness and support is needed for parents and families with extremely challenging infants.

The new research is considered very exciting though because now babies who are at risk of developing mental health conditions can be more easily identified by GPs and child health nurses at their 12-month checkup – if questions are raised about any behavioural challenges they might be presenting.

“We hope that by identifying infants at risk for poor mental health during childhood, we may be able to develop new interventions to help these children on to a pathway toward good mental health,” says Dr Cook.

“We have a unique opportunity here to begin trialling targeted interventions and increase family support, to see if we can help improve outcomes for these kids and their families.”

If you are at all concerned about the wellbeing of yourself or your baby, please speak to your GP or a mental health parent support organisation such as PANDA.
Share